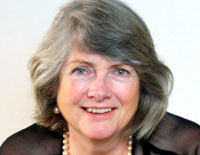 San Miguel is a wonderful place to live but it isn’t exactly one of the renowned centers for traditional Mexican food. As I spend my time writing about food and its history, I’ve always felt a little guilty that I wasn’t heading off for Puebla, Oaxaca, Michoacán and Veracruz, famous for their culinary traditions, instead of enjoying the good life in Guanajuato. That’s not to say that you can’t eat really well here. I’ve enjoyed wonderful meals in both homes and restaurants. But when visitors turn up expecting me to put them on the inside track to the best of Mexican food, I have found myself shuffling my feet and apologizing for not being in one of the shrines of Mexican cooking.

Well, now I’ve stopped being defensive. Instead I round up my visitors and promise them that right here in San Miguel we have someone who is a true expert on Oaxacan and Michoacán cooking and much else besides. That someone is María, a charming woman in her 40s, had the luck to be born into a family that boasted generations of passionate and reflective cooks. From her earliest years, she watched her mother, her aunts and her grandparents as they worked in the kitchen. Her mother´s family had recently moved to Mexico City from Michoacán.

For 40 years, her maternal aunt Lupe managed the Jockey Club, one of Mexico´s most prestigious private clubs. To satisfy its demanding clientele she had María´s mother prepare the traditional sweets – flans and cocadas and ensoletados – that Mexican gourmets loved. Her father´s side of the family supplied the Oaxacan input. Her paternal grandfather, an expert amateur baker, made the delicacies for María´s first communion. Her grandmother ran the corporate dining room for the Mexican branch of Kodak, making sure the executives enjoyed Mexican food as fine as they would have had at home.

On a recent visit, any worries that her family´s experiences with high-end catering might make María´s cooking a bit rarified quickly evaporated as she explained the basics of making the most traditional of Mexican dishes, tamales. It´s the taste and texture of the tamal itself that matter, she explained when one of us asked why the filling was less ample than in American tamales. The filling is just a little extra gift, a surprise, to delight the taste buds. As we relished her range of savory and sweet tamales, including the delicious Oaxacan tamales wrapped in banana leaves, we began to see why and to feel that we were learning not just the techniques but also the aesthetics of Mexican cuisine.

Lovely as María´s tamales are, they´re too time-consuming for me to make regularly. So I was delighted with her class on sauces. She took us through the difference between salsas, moles, adobos, pipians and all the other preparations. Then we made half a dozen salsas, learning how to ring variations on each. Better yet, María showed how, with a pair of salsas in the fridge, we could turn out dozens of different dishes ranging from homey chilequiles to fragrant soups, stews and elegant marinated roasts.

So, no longer am I going to worry that I am short-changing my guests if I don´t urge them to plunge into the summer heat of Oaxaca or the urban congestion of Puebla. Instead we will wend our way through the streets of Colonia San Antonio in San Miguel to find out a bit more about Mexican cooking in María´s kitchen.