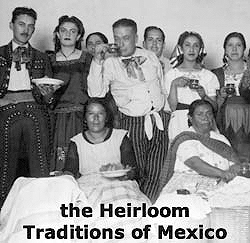 I love sharing my heritage of classical Mexican home cooking with my students. From my earliest years, I watched my mother, my aunts and grandparents in the kitchen.

My grandfather on my father´s side, Don Agustín, was born in the state of Oaxaca in 1901. He inherited his family´s tradition of the Oaxacan cooking and bread-making, which he did for family occasions such as the First Communion celebrations of his grandchildren. Don Agustín married Doña Laura, who was born in Ozumba, in the state of Mexico, in 1903. Her family owned a wheat and corn mill, and she worked as a kitchen director for companies such as Kodak and the National Rural Confederation in Mexico City.

My grandfather on my mother´s side, Don Jesús, was born in Mexico City in 1881. His family owned the Hacienda Maderera San Andrés. He always loved to cook and did so on special occasions. He married Doña Esperanza, who was born in Morelia, Michoacán, in 1891. She inherited the great tradition of Morelian cooking, renown above all for sweets. Even when gas stoves became available, my grandmother Esperanza refused to use them and continued to prepare her famous sweets “on carbon embers” (“al rescoldo del carbón”) or in a wood-burning stove. That is how I learned and continue to make sweets. From this branch of the family, I have inherited a variety of handwritten recipes, the oldest from approximately to the late 1700’s. 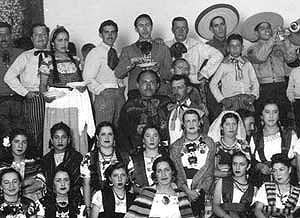 My mother´s sister, Doña María Luisa Solórzano, married Don Francisco, owner of Hacienda Ganadera de Toros de Lidia “La Punta”, where bullfighting bulls were raised. This Hacienda was particularly famous for its kitchen, from which were served banquets for bullfighting stars and national and international politicians as well as renowned artists such as Tyrone Power, Orson Welles, Rita Hayworth, and Dolores del Río.

Another sister of my mother´s, Doña Guadalupe, worked for 42 years as the General Manager of the “Jockey Club” in Mexico City. She was responsible for grand banquets for weddings and parties for politicians and diplomatic personnel, including Prince Philip Mountbatten, consort of Queen Elizabeth II of England. For many years, my mother made Mexican desserts, such as coconut macaroons, flan, and almond caramel.

From both sides of my family, I have inherited traditional cazuelas (clay pots) and ollas (copper pots) and other cooking equipment. I also have a collection of hand-written recipe books from both my father’s and mother’s families. For the past fifteen years I have used these cooking implements and our family’s heirloom recipes in my cooking classes in San Miguel.